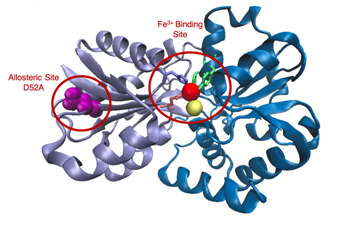 Goksin has been working on the structural and functional characterization of Haemophilus Influenzae Ferric Binding Protein (hFbp) under various environmental conditions. She aims to explain the unique iron acquisition mechanism of gram-negative bacteria from human transferrin by monitoring structural differences under changing environmental conditions. The main focus of her study is to relate conformational changes during iron binding and release processes by applying statistical methods on to biochemical analyses while comparing protein structure in solution with the known crystal structure by using small angle and wide angle X-ray solution scattering. She also addresses the effect of allosteric site mutations on the structure and function of hFbp. This work is being done in collaboration with the Sayers Lab.

Resistance Mechanisms of E. coli on the Inhibition of DHFR


Antibiotic resistance is a common health problem that requires urgent and creative solutions. According to the Centers for Disease Control and Prevention, USA, globally more than 150,000 deaths per year occurs due to antibiotic resistance. [1] Thus, current medical practices seek for a thorough understanding on the purpose of developing proper approaches to attack this problem. Dihydrofolate reductase (DHFR) is an enzyme that catalyzes the hydride transfer from the cofactor NADPH to 7,8-dihydrofolate (DHF) to facilitate the formation of 5,6,7,8-tetrahydrofolate (THF). THF is a critical carbon carrier in the biosynthesis of nucleotides which makes DHFR an important player on cell growth and proliferation [2]. Trimethoprim (antibiotic) and methotrexate (antineoplastic agent) are known inhibitors of DHFR which are used in therapeutics. Trimethoprim was synthesized in 1962 and is the last original antibiotic produced; all other antibiotics produced are some variation of older antibiotics. [3] Trimethoprim inhibits the function of DHFR by competitively binding the enzyme, displacing dihydrofolate. We are trying to understand the physical rationale behind the resistant DHFR binding mechanisms and selectivity of the enzyme between DHF and Trimethoprim. In pursuit of this aim, we use atomistic level Molecular Dynamics simulations and utilize the Free Energy Perturbation Method to understand energetic effects of resistance, to trace the roots of catalytic efficiency and selectivity towards the substrate.


A Practical Study of Conformational Dynamics with Perturbation Response Scanning


The dynamic nature of a protein gives rise to a variety of conformations which are relevant to its biological function. Studying the conformational change of a protein is exacting due to the complexity of the information it contains. Perturbation Response Scanning (PRS) method is a promising method, developed in our lab [1] to study the conformational dynamics and the biophysical properties of each structural state. PRS is based on sequentially perturbing every residue of a protein and recording the resulting displacement as well as directionality as a linear response (Figure 1). The overlap is calculated between the measured and predicted directions and residues/perturbation directions providing high overlaps are further evaluated to determine the origins of conformational switching. Currently, we are working on adding a new option to this method and couple it with Steered Molecular Dynamics (SMD) technique to prepare a practical protocol for everyone. 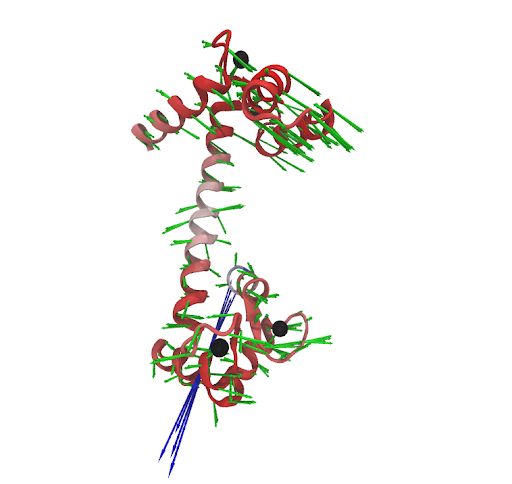 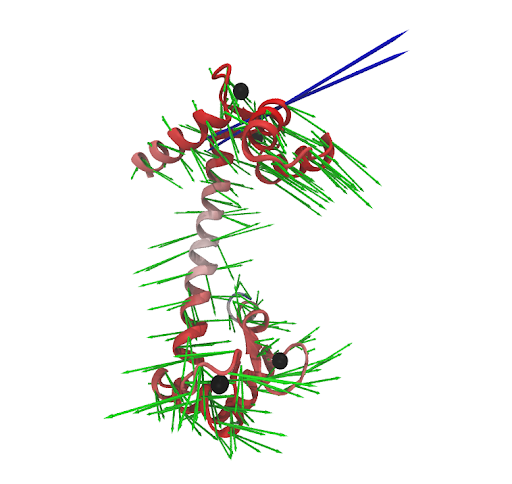 Figure 1. Results of Apo to Holo PRS on Calmodulin.


Testing the Applicability of PRS on Molecular Energy Landscapes

While protein dynamical studies can be carried out in solution and molecular dynamics (MD) simulations can be used to probe dynamics of folding intermediates, computationally expensive in silico studies cannot attempt to statistically elucidate entire protein landscapes. Illustrated in the figure below, representative two-dimensional energy landscapes of model molecules such as pentane ‐ based on the essential degrees of freedom of the two torsional angles (φ) ‐ are readily obtained using MD simulations on a millisecond timescale. These can be subsequently compared with energy landscapes constructed using the steered molecular dynamics (SMD) approach, by which a conformational change is induced by applying an appropriate, site-specific external force. Potential positions and directions of external forces are obtained using a computational tool known as perturbation response scanning (PRS) [1], whose implementation is illustrated in the figure. Our research aims to study the relationship between SMD and pure MD energy landscapes of toy models, and to test the applicability of the PRS-SMD approach in elucidating molecular energy landscapes. 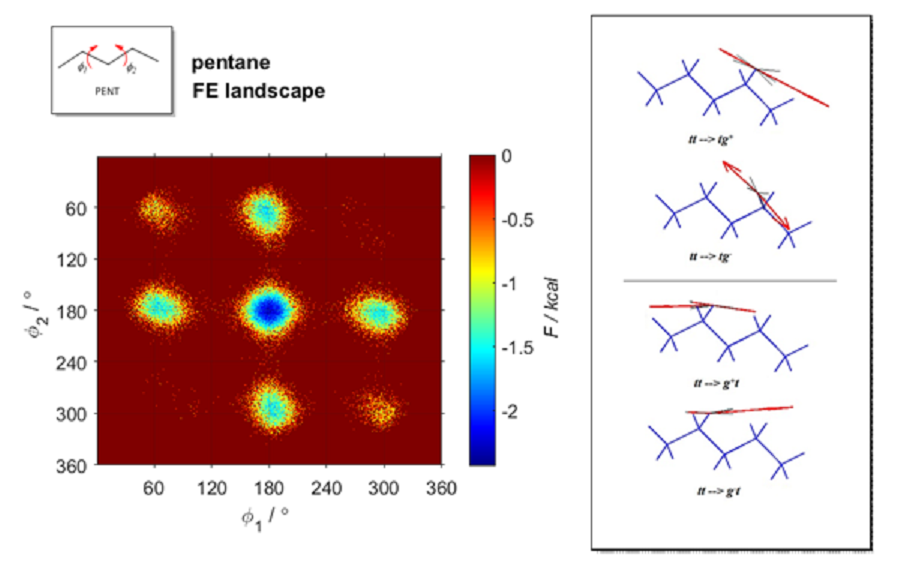 
TolC is a protein that has an important role in secreting toxins and expulsing antibiotics and bile salts in gram negative bacteria. The gating mechanism of the homotrimeric outer membrane bacterial efflux protein, TolC (Figure 1a) has not been elucidated completely. We perform molecular dynamics (MD) simulations to understand the dynamic behavior of closed and open forms of the TolC protein, to determine spots in the protein that may be crucial in the functioning of the protein. Also, perturbation response scanning (PRS) method enables us to observe the effect of important residues on the conformational change. 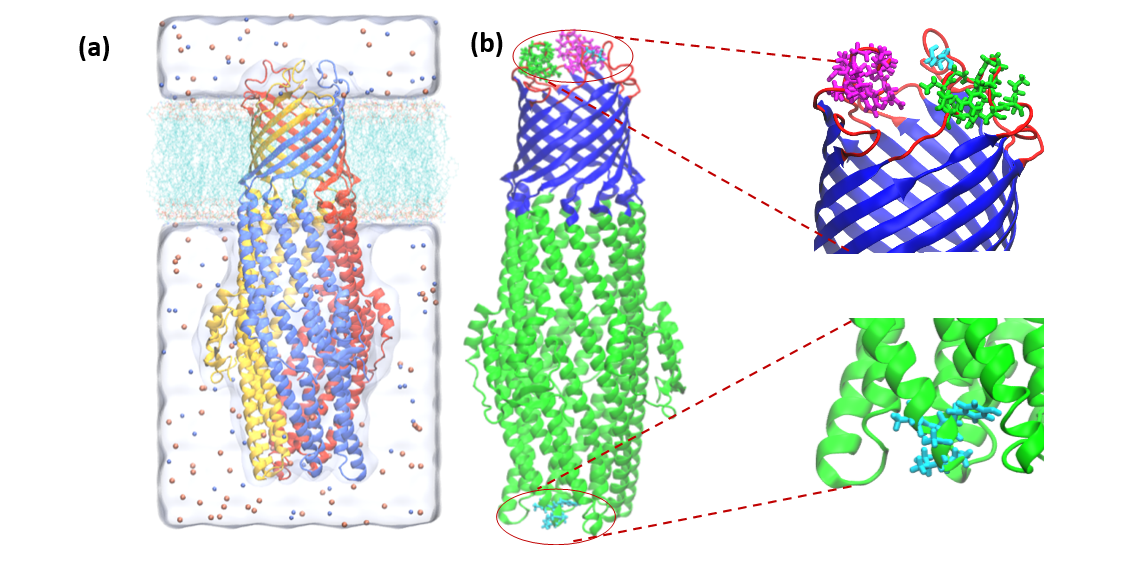 Figure 1. TolC protein structure embedded into a POPE membrane structure in 0.15M NaCl solution (a). Fluctuated residues on the extracellular loops and periplasmic helices of the TolC (b).

Our preliminary results show inward and outward motions in extracellular loops and periplasmic helices at the opposite ends of the protein control function, while the large middle section of the protein is largely immotile. Such motions are possibly related to the picking up and disposing of the toxins by the efflux pump. The fluctuating residues in the extracellular and periplasmic parts are indicated in Figure 1b. Further analyses are in progress to claim crucial residues in efflux mechanism of the TolC protein.


We employ graph theory to study protein structure and function. We construct residue networks (RNs, Figure 1; also link to ref) from wild-type and in-silico generated mutant protein structures to analyze the differences. To this end, we mainly utilize four network parameters; average path length (L), betweenness centrality (BC), clustering coefficient (C) and degree (k). In our group, we treat each residue as a node with edges between nodes within a pre-selected threshold distance, determined by physics-based considerations of amino acid (AA) distributions in folded proteins. L is a global parameter providing reachability of individual AAs and is inversely correlated with residue fluctuations. Conversely, C and k carry local information of a RN. However, our main focus is on BC, because it carries both local and global information on the RN structure. We find AAs with high BC to have large chance to occupy functionally important locations by controlling information flow through optimal paths. Therefore, we postulate that mutating these residues might disrupt function. We correlate these parameters with conservation scores of AAs to rationalize the link between physical meaning of network parameters and evolutionary propensities. Our group has derived analytical relationships for nearest-neighbor correlations utilizing k and C for close-packed spatial networks, exemplified by proteins, using graph theoretical relationships on networks with arbitrary degree distributions having backlinks [1]. While the correlation between B-factors and L has been well-established for some time [2], an analytical relationship utilizing adjacency matrices of graphs is yet to be derived. Similarly, analytical expressions relating BC to basic network properties are needed. Our goal is to relate protein structure to function through computing properties of RNs and rationalizing them by analytical means. Another focus area is the diffusion of information between allosteric regions in the RN of a protein.

Figure 1. (A) RDF between the Cβ atoms averaged over 595 nonhomologous proteins. The positions of the first, second, and third coordination shells are marked. (B) The protein DHFR (left), its nodes centered on the Cβ atoms obtained from the X-ray structure (PDB code 1rx2) are displayed on the upper right, while the full RN constructed by assigning links if two nodes are within 6.7 Å of each other is displayed on the lower right. [3] 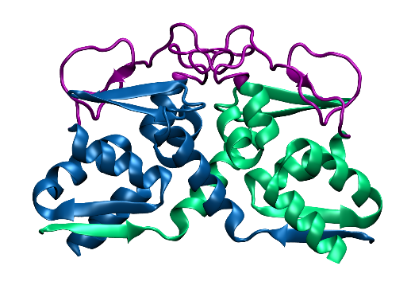 The protein structure of the BTB domain of PATZ1 transcription factor was solved by X-Ray Crystallography (PDB id: 6GUV-6GUW). The BTB domain is a dimer of two identical subunits (blue and green). Part of the structure (loop in purple) was generated by homology modelling. The sequence of this loop is unique to PATZ1. The analysis of the structural and dynamical flexibility of the loop, suggests a role in binding mechanisms. The main focus of Sofia’s research is based on two hypotheses. She is testing if the binding could involve other regulatory proteins of the transcription process or an additional BTB domain that would form a more complex protein conformation. The function of this loop at molecular level are under investigation.